It had been a very agreeble evening spent chatting over dinner with two doctors from Zurich. He, Swiss, a psychiatrist, and his wife, an Italian, pediatrician. They forsook their mother tongue for the world’s own and we had a very enjoyable evening.

Checking out, I am getting used to cutting quite a dash in the colours of the day, colores del dia. The propreitor of the small hotel told me that when he was young he was a cycling “ganodoro” in the mountains. He was good. And then he had to stI op due to a diagnosis of testicular cancer. It’s true what they say about learning a language. You can understand more than you can actually say. I guess that’s because as you build your vocabulary you can’t pull the right words out of the drawer quick enough to actually say what you want to express. I also understood perfectly his directions to the supermarket for provisions.
The road out of El Burgo picked up where yesterdays efforts left off. More 9% gradient and a long slow grind to the top. There wasn’t even any time for warm up. I was straight into it.
But it was a beautiful morning. As I climbed higher and higher early morning mist in the valleys below began to lift under the awakening rays of the morning sun. The silence of the mountain road proved the perfect backdrop to birdsong.Somewhere in the valley I heard a creaking tractor at its labours. Wild poppies grew by the roadside. Me, the road, and the mountain.

The scenery was stunning. I ached to stop and take pictures all the way up but I have learnt the hardway that taking pictures on the way down is far easier. Once you are into your rhythm climbing these momentous slopes you just want to keep going.That’s how you get up the mountain.


As I climbed up the Sierra de las Nieves I began to come across more and more cyclists. I realised that this is a favoured local ride. They weren’t tourists, like me, these guys were training seriously. As the hare swept past the tortoise I knew they wouldn’t be doing that if they carrying an extra 20 kilos like I am. But I didn’t care. They all called a “buenos dias” and I was happy in my groove.


Reaching the top and coasting down the other side was pure joy.


Downhill at 20mph for 15 minutes….. And I kept the speed down given that with two panniers on the back the bike might not always behave itself. More cyclists too and it is clear why.

The whole area is just beautiful. For the first time in the ride I could sit up in the saddle and just enjoy.
The road surfaces are gorgeous, as I expected, smooth, almost, as a babies bum. Which for cyclists is a dream (where as our roads in the UK, Cameron, are an UTTER DISGRACE….. Shove your Austerity where the sun don’t shine).
I rolled into Ronda ( help help me Ronda) feeling pretty chuffed with myself. I didn’t fall for Ronda’s charms. She’s a fickle mistress,I hear. I had to press on, fortified by a jamon y queso sandwich which I sat and ate by the roadside much to the amusement of the locals.
The hard work in the mountains had been done and though there were some climbs still to do I was able to enjoy some long speedy descents and take in the majesty of the Serrania De Ronda, an area of outstanding natural, jaw dropping, beauty. 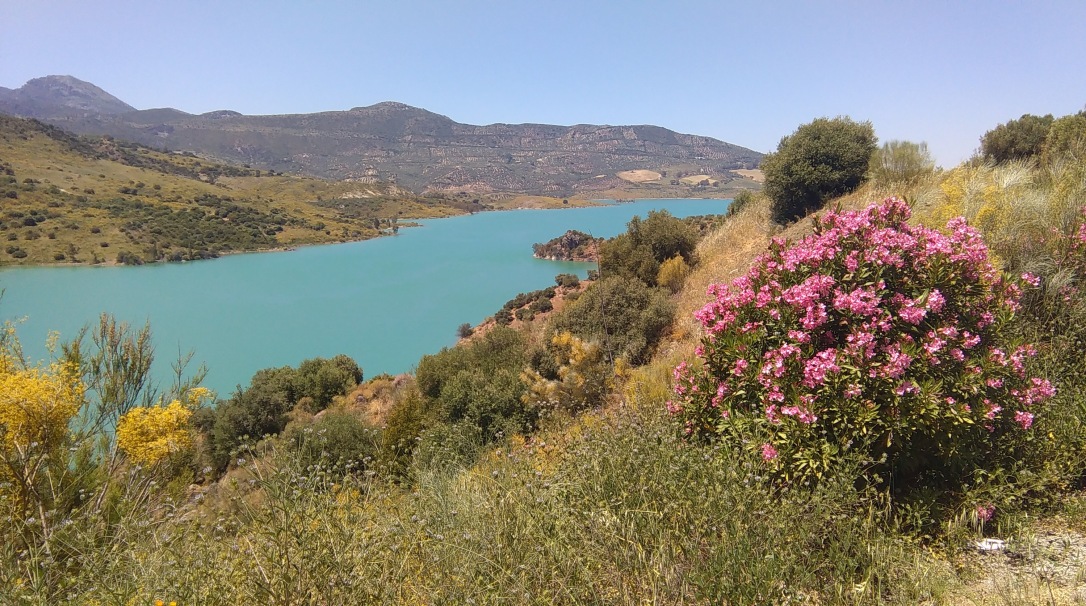 It is funny how inanimate objects become your friends on solo trips like this. Not that I’ve done one before, of course. That’s the reason for the challenge. My bike will have ridden a few thousand miles with me by the time I complete this trip,all told.I might get him some orange walled tyres as a treat when this over. And Mr.Garmin, never drinks, cheap to keep, but a bit arrogant. Constantly insists that he is right. So when I think he’s right I let him be right and when I think he’s wrong I tell him.
Rolling into Algodonales he took me straight to the door of my apartment. A quaint, gorgeous little 3 roomed apartment which was part of a small terraced house in this old Spanish town in the hills.
After the usual wash and brush up I headed for the Plaza. I am making a habit of arriving during siesta. There is a natural feel to Spanish towns at this time of day since whilst mid-afternoon is hot, it’s not as hot as about an hour later when it is baking, and the only noise in town is the slurping of cerveza and the bumble of gentle conversation. Such as it was in Algodonales.


I bought an ice cream, a litre of water, and a cerveza and dealt with them in that order, and sat to watch the world go by – job done for the day.
Being a fan of live music, and for all the traveling that we have done in the last 20 years, we joke, Mrs.Monkey and I, about how we always arrive too early or too late for the show, the festival, the fiesta, with a few notable exceptions. So there I was, forcing down my cerveza, when I noticed a raised platform at the end of the square. ” damn, missed the gig again,” I thought.
This was followed shortly afterward by the arrival of a municipal jeep to unload two speakers and a mixing desk. “Way hey,” I thought, “there’s music tonight.” I was also impressed that the Grunts ( I don’t mean to be rude) who connected it all together and “Wun Tood – Wun Tood” to ensure that it worked. I wondered at the dais though.

Those of you who know me can imagine my disappointment when it became clear that this was to be a political electioneering address accompanied by earworm music the like of which would drive you mad.

Oh, well, you can’t have everything. It was a beautiful evening. I was happy but tired. And tomorrow was going to be a trundle down into Seville.