Bilbao had been a blast. I must admit, though, I was surprised by the obvious presence of the  regional Euskadi language. All signs were in Spanish and Euskadi with English included sometimes. On occasion, Euskadi took preference. I’m aware of the campaign to save Euskadi as a language and if nothing else, certainly the campaign is very visible.

Leaving the conurbations of the city took some time. The result of endless traffic lights and my setting off for Laredo just as home time for siesta was beginning. However, once I was out of the city the road tended to hug the coastline and cycling along by the sea was an immense pleasure.

The black dots are surfers but I darned if I can see a wave worth surfing. It looks cold too.

Numerous pilgrims tramped their way towards Santiago de Compostela. They have a long way to go and I reflected on the commitment it must take to accept the challenge of walking all the way, many of them carrying huge backpacks. I saw a few double back on themselves as the unhelpful signage at a road junction offered nothing but confusion. This is frustrating when you are cycling but on foot it must be heart breaking if you go the wrong way for an hour. 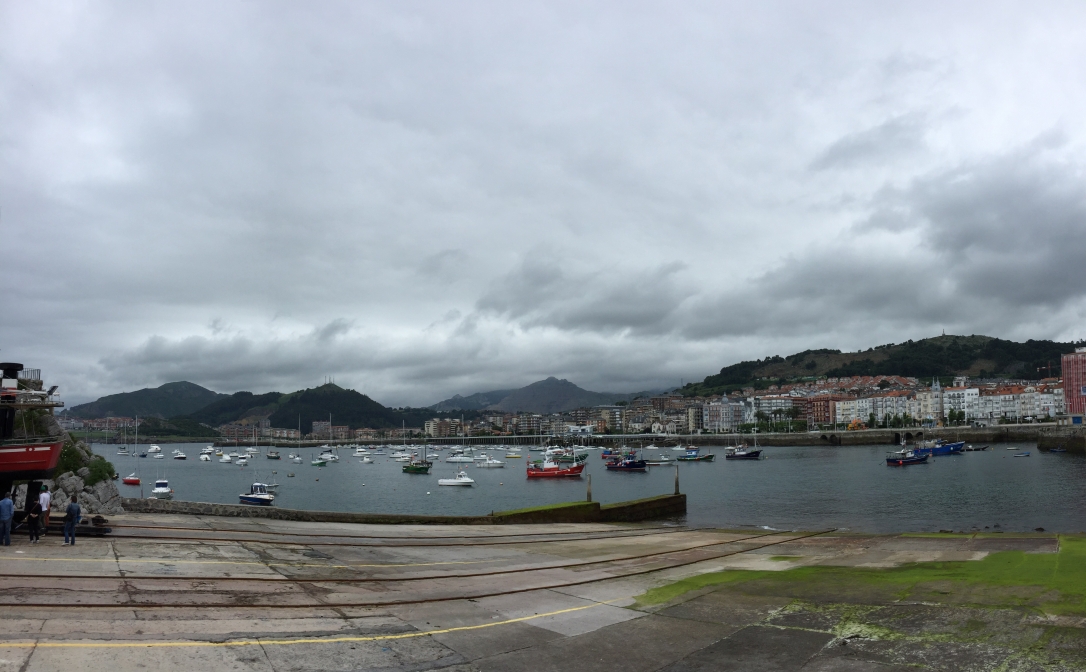 I paused into Castro Urdiales, a small town with an enchanting fishing and boating harbour. A church stands on a promontory to the western end of the harbour. The sparse tree giving the whole scene something of a spooky atmosphere on a dull day.

Laredo was much the same as last time, still apparently waiting for someone to arrive. There were a few tourists but certainly not the number that would be required to fill all the holiday hotels. It gives the place a strange feel.

I stayed in the annexe of an old hotel and as the sun rose high towards noon an agreeable morning was spent eating breakfast and drinking coffee in their quiet, charming garden. With just 40 miles or so left of my journey, plus I’d received a text to tell me that the boat was delayed, there was no hurry.

I cycled the route to the boat from here two years ago and in retracing my steps, or rotations, I was surprised by how much I could remember. Where the hills were, the towns and junctions of note. Santander by bike is relatively easy. Once you join the cycle path that runs through the town to the port area you can just keep going. 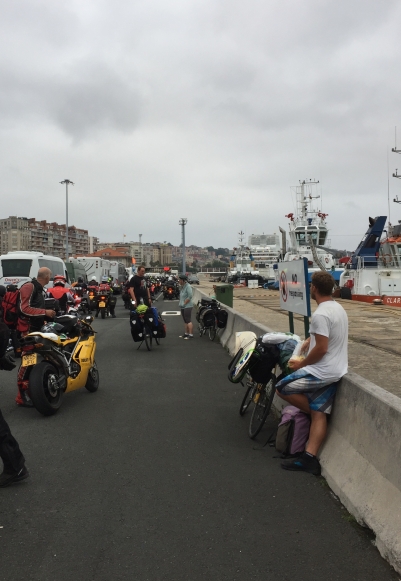 Yep, the young dude on the right has a surfboard strapped to his bike. Now that was a first .

And that was it. I joined the hordes waiting for the ferry. Hours to pass, sunshine to enjoy and beer to drink… and football on tv in the cafe. Probably my last south to north ride was over. I will miss it. I have learned and seen so much in the three rides that I have been lucky enough to undertake the memories will keep popping back into my head for years.

I have fallen in love with Spain, its majesty and its flaws. The old villages are charming, the castles and cathedrals often wondrous. I will be back, of course, perhaps with a different plan. The politics aside, I could easily live here and take to the Spanish temperament.

Check out my book of the first two rides now available from Amazon. It’s not just for cyclists, it is for anyone who is looking to travel Spain off the beaten track or just an entertaining read of solo journeys hoping to inspire others to do the same. Keep your tyres hard  🙂