Some years ago I was whiling away the time with one of my favourite indulgences, scanning the Internet Archive live music lists for artists I’d never heard of and just dipping in. Actually, it is still one of my favourite ways of finding new music. No algorithm is going to tell me what I’d like.

The Archive staff top pick for that week was a show at Shuba’s Tavern, I believe, in Chicago, and so that got a click, and is the moment I became a huge Alejandro Escovedo fan. Just listen to the first track and you’ll see. What a song ! And acoustic too ! What a trio !

I was onboard and travelled backwards through the catalogue and have travelled forward with Alejandro ever since. Firstly, for me, is that he is a great songwriter and then, a great performer and seemingly very likeable guy. (At the close of one show I attended, in a small hall, he stood at the door and shook everyones hand as they left.)

Another reason I respect this artist is that though he isn’t a huge star over here he doesn’t ignore his European fanbase and when he can, and I know it’s not cheap and there’s probably very little money in it, he still makes the effort and gets over here to share his music with us.

Now coming to the end of this European tour and excellently supported by the Italian band, Don Antonio, I caught them at The Tunnels in Bristol on Sunday evening. The Tunnels is, as the name suggests, adjacent to the railway station and is two railway arches converted into a live music venue, resembling those old photos of The Cavern in Liverpool, oddly enough. 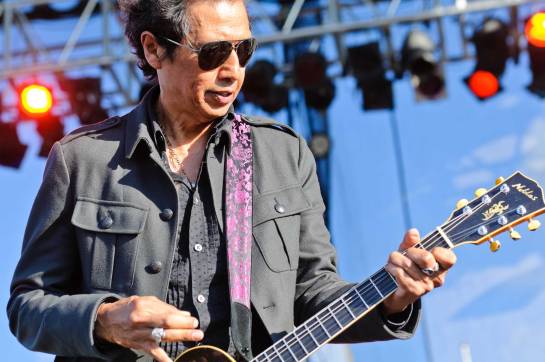 The music of later years is again electrified, not purely acoustic as in the archive clip, but it still rings of great songwriting, and great rock music. Emerging from the punk era into the light he remains a class act and engaging performer.

The latest album “Burn Something Beautiful” arcs back to the rock days of yore and provides the new material in the show, but some old and new favourites still pepper the repertoire to please the crowd. “Sally was a Cop” (I just love it) has now expanded into a 10 minute jam and “Sister Lost Soul” is always touching whenever you hear it. It grounds us all in the midst of our reverie.

Neil Young’s “Hurricane” winds us up after a couple of rocking hours and we go away happy and fulfilled.

The making of music may be more democratic these days. Laptop, iPad, loops to order, but when it comes down to putting on a show you need musicians with instruments.

Sunday night – Bristol – we have been entertained by a true artist and gentleman. Thank you for coming.