Mother Hen had been in charge of the poultry farm for many years. She’d worked hard to be Top Clucker, as she was known. She had once been penned in, on a closed farm that few people could see inside, until one day someone managed to knock a piece of wall down and Mother Hen and lots of other poultry escaped, forever rendering the closed farm much smaller than it was.

Then she began her work to bring all the poultry together , those from inside the old farm and those who had been outside looking in, until hundreds of different poultry joined with her in one big collective farm. And so over the years the new poultry farm grew bigger and bigger, and mostly the hundreds of turkeys were happy. Of course, they grumbled a bit when the grain was short but they tolerated each other and shared what they could, especially when the big human farmers took all the money that paid for the grain and the big poultry farm had to find other ways of paying for it. 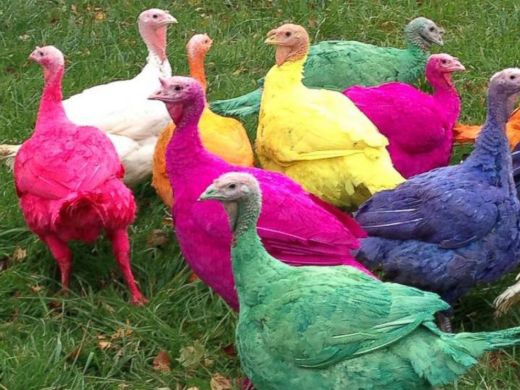 Some turkeys were very sad when they saw other turkeys washed up on their beaches, drowned, fleeing farms that were often sheds of fighting and fleeing foxes. Some were different coloured turkeys, bright and strange, but still turkeys. Turkeys cannot stretch and preen their feathers when they are stressed, and so those that didn’t drown and made it to dry land were allowed into the farm for safety. The new turkeys mingled with the old turkeys who wandered at will as free range as could be.

In time the turkeys wanted more from the ground they pecked. And with the new stranger turkeys pecking the same ground seed was becoming scarcer. A disgruntled group was formed and became more gobbley creating unhappiness and disruption throughout the yard. Within this disgruntled group was a smaller group, noisy, haughty and sneery. In truth, this group of Splinter Turkeys had been grumbly all along and never really trusted Mother Hen, whose home country kept beating the Splinter Turkey’s country at games.

And so the noisy leaders among the Splinter Turkeys wanted out. They clucked, gobbled and shrieked for all their worth -they didn’t like the new stranger turkeys in particular – until it was agreed that all the Splinter Turkeys, 100 of them, should have a vote as to whether to stay in the big farm with Mother Hen and try to make poultryism better for all turkeys, or leave them to it and escape to form their own farm.

The Splinter Turkeys decided to call this their “Christmas” , when all turkeys together in their corner of the yard would be happy and free.

And so the hundred Splinter Turkeys had their vote and the votes counted. The result of the “Christmas” vote was, indeed, a big surprise. Thirty seven turkeys voted for their own farm, thirty four turkeys voted to stay with Mother Hen, and unbelievably perhaps, twenty nine turkeys didn’t vote at all thinking that…..well, who knows what they were thinking ?

So it was that the 37 turkeys won. Mother Hen was very disappointed but left the Splinter Turkeys to peck their own little corner of the yard anyway. The other turkeys were shocked and angry. They gobbled and shrieked turning the yard into a confusion of noise shouting “Stuff you, Splinter Turkeys, we’ll save poultryism without you.”

And so it was that the Splinter Turkeys voted for Christmas and nobody really knew whether Christmas would be a good thing or not. And in the end, everyone was unhappy.

Cartoons from The Guardian and some Connecticut turkey farm, amongst others.

2 thoughts on “Mother Hen and the Splinter Turkeys”