Staying at the Parador had been a treat. I pulled the bell rope above my bed hoping for a hot and cold running maid, but with a quarter of a mile of rope to twitch not a sound was heard downstairs. No-one came.As the birds sang and the cowbell clanged I pulled off my nightshirt and night cap, reached for my morning flagon of ale and turned on the tv. From the news reports covering the recent elections it was clear, Spain has swung to the left. Perhaps their had been a new Socialist revolution and I would have to get my own breakfast.

The world is forever changing.

And talking of flagons, I tried a white wine last night, from this region, and made from the Pardina grape. I swirled like the gourmand that I am.

My tasting notes are;

A hint of sweetness though not too much


With nipples greased, and everything else, I was ready for the road. It was a beautiful morning. The sun was warming up quickly and loe, no wind. Joy.

I was looking forward to the hills in the distance. Whilst that means more climbing it does also mean trees and views to appreciate. The landscape was going to change.

Many of the towns that I pass through proclaim cafes, bars and restaurants but I think I am too early. Given that it is nearly the end of May I’m not sure when their “season” starts. Can’t be long now. So I am dependant upon the Great God, Repsol, bringer of food and drink, to keep me rolling down the road.
I luncheon on the neglected steps of the old church at Banos (Ban-yos) de Monte Mayor which stares down at the traveller as he passes. Taking the sun and my ham and cheese croissant I pondered the impact and passions aroused by Christian faith in Spain, and, of course, Italy.
I had rested the night in a convent, photographed and wandered ancient medieval churches, wondering at their artwork, overheard the strains of choral practice through an open window in Seville, and here I was, eating lunch on the steps of another, perhaps forgotten pillar of faith. The Church and State have had their tussles down the centuries, struggling to wrest power and influence from each others hands. In recent times socialist governments have brought into legislation new laws on abortion and divorce and other liberal enactments that have eaten away at the reach of the Papal See.

I wondered if Spain would go the way of the UK and become a more secular society as a younger generation grows up with cynicism and instant messaging.

I was also intrigued by the name of the town. Banos, half way up a hill ? Rambling through the town it became quite clear that there is a tourist market here. Tat Shop after Tat Shop building business on the back of the Roman Baths that are situated in the centre of town.


I was happy to climb out of Banos de Monte Mayor. The trees were thick and the birds were singing and the greenery lush. What I didn’t realise at the time was that this was the start of about 3 hours of climbing. On and up, before I would reach Guijuelo for respite. 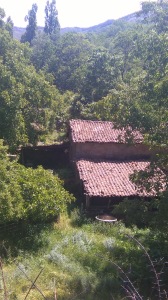 Guijuelo is a small industrial town with a population of 6000 and my instincts as I exlored a little after checking in was that it reminded me of Clay Cross back home. The main road runs right through the middle and on either side of it appear vain attempts to make a living.

Incomes may have dropped since the boom years and times may be harder but throughout this trip I have found the Spanish people to be nothing but helpful, kind and patient with my broken Spanish language. Desperate for a beer (I’d inadvertently booked a bar-less hotel) I sauntered towards the Main Square to find the only bar open, The Sherrif. Ordering my cerveza and handing over my €2 coin the Senora checked her till. She didn’t have a 10 cent piece for my change so gave me my money back, and despite my protestations, insisted that I have a free beer. A simple gesture that lit up my day after a long grinding climb. I thought it imprudent to ask for another, though.

7 thoughts on “Day 8 Plasencia to Guijuelo”