Welcome to Extramadura. There isn’t much of a tourist trade around these parts, at least until Merida. Monesterio is on the route to somewhere else. Santiago de Campostela, for instance. So you are not going to find much English spoken and the local dialect comes at you with the mercy of a Gattling Gun. My “Estudio Espanol, pero no entiendo rapido” usually buys me a second shot at 90% velocity. And then with a few waves and nods we will arrive at a conscensus of understanding.My Spanish is unashamedly, and for obvious reasons, touristic. But the more I am being immersed in the language with no other options the more I am enjoing speaking Spanish and being understood.


I felt the urge to complain last night that my beer smelled odd. The barman sniffed and told me that it smelled of beer, but he poured me another one anyway. After a few more swigs and sniffs, I was forced to acknowledge that he was right – it smelled of beer. All this in Spanish. He might think that I’m a prat ( uno pratto) but at least I get points for making the effort.

Knowing that my exhaustion was down to lack of food and sleep I feasted like a ravenous beast on steak and chips and then hit the sack very early, and to my joy, despite the companionship of a mosquito on a scooter, I slept like a baby.

Up with the morning chill and on the road, trees give way to barrenness for a while as I ride high across the plains. My exhaustion over, I felt great. Today was a new day.

This is a high flat land with an accompanying breeze and even though I was riding into a headwind for most of the day I was able to make good time. 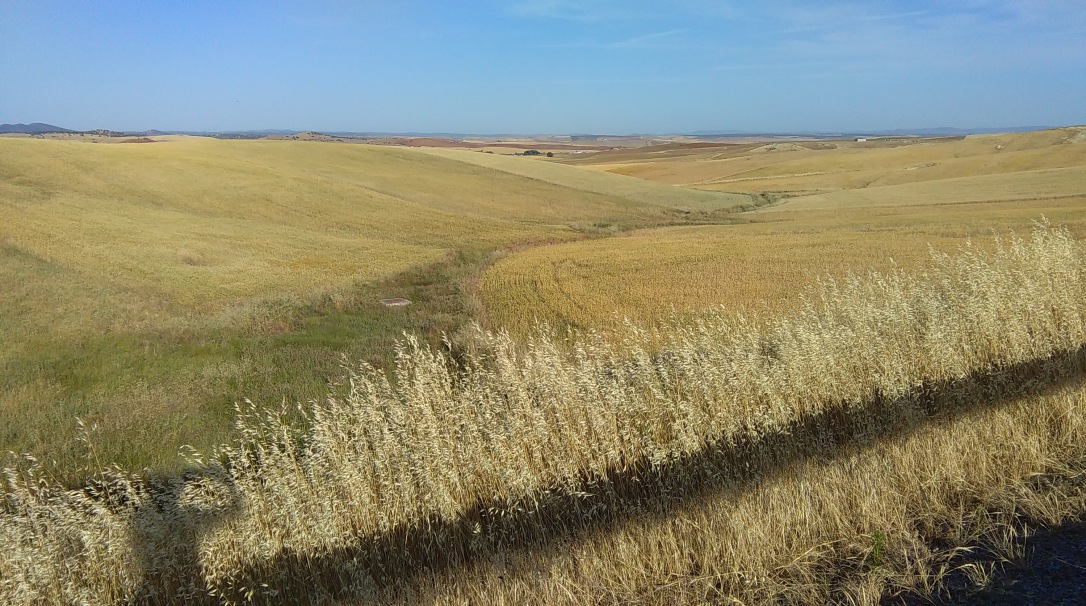 The landscape offers thousands upon thousands of vines and olive trees. Stretching for miles. Planted in neat rows an ancient tractor width apart. A weary car, parked under a tree, alerts the passerby to a dusty farmer somewhere up with the lark, dragging dead branches, vine stocks and weeds into heaps for burning. The task of tending these vines and trees must be overwhelming. Where would we be without them?

There is livestock here too. You can’t see it this early in the day but you can smell it !

But this is wine and olive country for sure.


The towns I ride through seem livelier than the ones south of Monesterio and once in a while I find myself on a road which is arrow straight as far as the eye can see. The panoramic vista punctuated by bodegas. Oh, if only I could stop and sample. But no, I must be disciplined.

Just as the day’s siesta is kicking in I roll down into Merida and through a lovely park where children are laughing and playing in the sun and enter the city as the Arabs did – over the bridge that the Romans built. 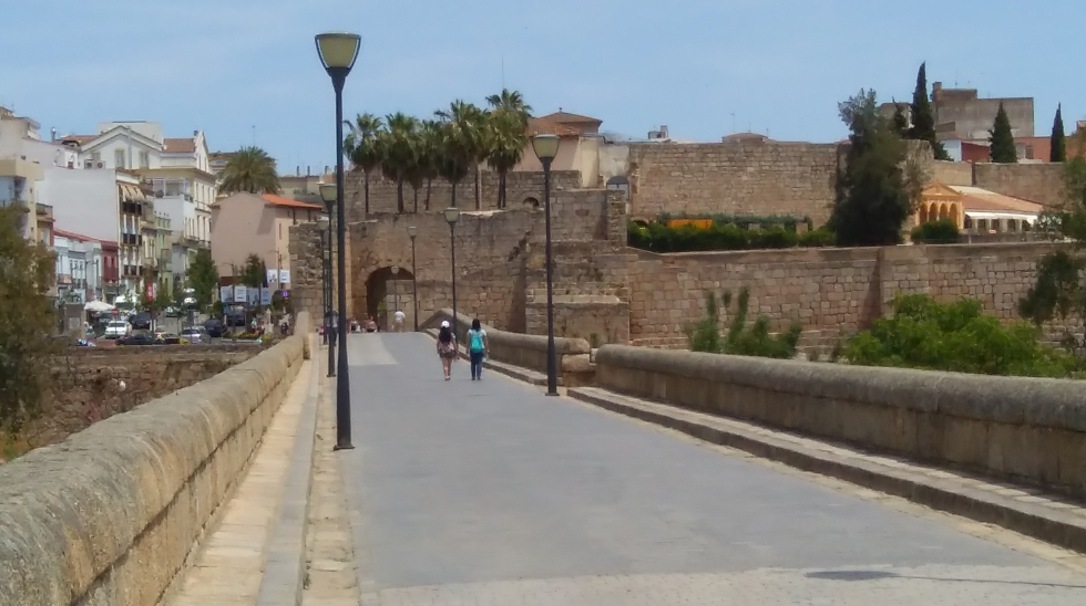 Merida is the capital city of the region. It is small but perfectly formed, like Kylie Minogue, and is also quite pretty, again like Kylie Minogue. (Enough, enough !) Merida was given it’s name by the Arabs when they overthrew the Romans but it is the Romans who have left their mark.

Historically the centre of administration for Romans and Muslims, the remains of the Alcazaba sit grandly at the end of the old bridge into town. More preserved structures can be found, such as the Arch of Trajano, and the meeting house, which is being restored in the centre of Merida.

However, you should head for the Amphitheatre and Theatre and gardens. At €12 to see all the monuments in town the “see all” ticket is a bargain, and I found the amphitheatre complex quite atmospheric.

But the centre of the action, such as it is during a siesta, is the town square, which is charming and elegant with it’s mix of modern cafes and bars rubbing shoulders with distinguished grandees.

As I go through my routine, emptying water into plants, finding my passport amongst my bags of jelly babies, loosening my helmet and freeing my hair, prima donna style, the concierge greets me with a smile and wheels my bike into the hotel for me. The first time, and probably the only time, the bike gets there before I do.

Tomorrow I will have been in Spain for a week and it’s time I pampered myself ( a bit) .

So far on my travels I have seen five people with broken arms ! It is beginning to feel like spotting magpies. You know, one for sorrow, two for joy. I wonder how many more there will be ?

8 thoughts on “Day 5 Monesterio to Merida”