Not much happens quickly in India. You must get used to it and build in some extra time. Just as we were leaving New Delhi we discovered that our e-ticket for the overnight train to Jodhpur didn’t specify from which station we should leave. New Delhi has two stations, helpfully labelled Old and New, some distance apart. A trawl of the web timetable wasn’t helpful but fortunately our hotel porter had the answer. By now we had lost a precious 15 minutes and so grabbed a cab to cover the 6km to Old Delhi Station. Old Delhi is just as crazy at night as it is in daylight, only darker.

We made the station with about 20 minutes to spare. A couple of hundred people and dogs slept clustered under a corrugated shelter, scattered like human confetti. The old station was due closer examination and appreciation but with no signs to a train and hassled by would-be porters we didn’t have the time nor the spare energy.

Fi asked a snack vendor for the Jodhpur train. Pointing to a stationary blue line of carriages two platforms away was like starting a firing pistol. I’ve never run so fast carrying 30 kilos of luggage. (I must get Fi to leave her ballgowns AT HOME.)

We found our First Class AC cabin and settled in to get our breath.*

The Mandor Express is a grand old lady who has had a few rivets added over the years but remains charming if a little wrinkled around the edges. We were just down the corridor from the exposed electrical junction box. Indian Health & Safety states that if you don’t touch it, you’ll be fine. The linen was rudimentary but at least we had some.

Toasting Gandhi’s birthday with some smuggled red wine (Ghandi’s birthday is a Dry Day in India)sipped from plastic water bottles we rattled along into the darkness. Sleep was elusive, broken by the bounce and jolt of intermittent stops and lurches across rail points.

Nonetheless, the timetable states that the Mandor Express leaves Delhi at 9.15 pm arriving in Jodhpur 7.45 am the following morning. And that was bang on time.

We were tired, dirty and perhaps a little smelly, but Jodhpur greeted us with a sunny smile.

The heart of the Blue City is the Clock Tower and Sardar Market. Houses were originally painted blue to signify occupancy by the Brahmin caste, the guys at the top of the Caste Tree, but those on lower boughs believed that the colour blue kept the mosquitoes at bay and so the unique role of the colour blue in neighbourhood identification is no longer caste in stone. 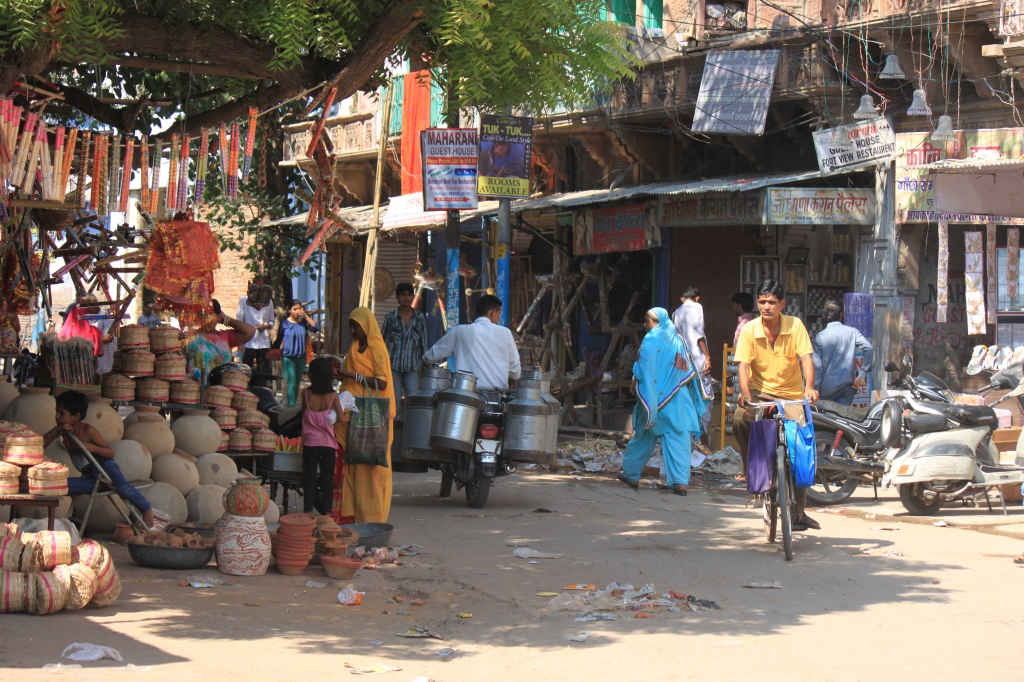 We spent many hours in Jodhpur market enjoying the variety and hustle and bustle. You can’t keep a good woman from the shops, can you ? A buzzing friendly atmosphere permeates the place. Ordinary people buying and selling everyday ware with the occasional fish-hook thrown out to catch a tourist or two.

Allow me to introduce some people of Jodhpur ….. 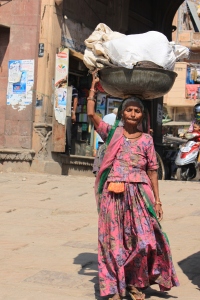 As dusk settled over the town  we shuffled aimlessly through the darkening blue streets. Fi had stumbled across a charity shop selling wares made by Dhalit women (The Smablil Foundation ? )and so supported them with a purchase wrapped in a sweet red linen bag. Too dark to see clearly we headed back to the main market where illumination now came from the many market stalls and motorcycle headlights.

The cattle you see on Indian streets are not the beefed up variety we are used to. They scavenge and fend for themselves and generally offend no-one at all. However, Fi, absently swinging her purchase in the evening breeze, was enough for a benign bull to see red. Stepping by he suddenly lurched at the bag, transported in his bovine head to the rings of Spain, he butted Fi as she whacked him on the head and pushed back. Another butt to the bag as she whipped it behind her back. “Olé” Another smack to his nose and off he went somewhat bemused and confused. Heady stuff those bhang lassis.

*  There is an excellent guide to using Indian railways here.

9 thoughts on “Overnight to Jodhpur – Fi enters the Bull Ring.”