Ah, the art of conversation… I pause while we all recall a memorable evening of conviviality and erudition……………….

Ahead of the game for the week, I thought I would pop down the pub for a Friday lunchtime drink just in case Computer John was in. Computer John works from home, and, after a hard week working up a sweat “computering”, can sometimes be found down the local celebrating a successful week earning enough to feed the kids and pay the mortgage. I like Computer John because he has a range of topics on which he can pass an opinion without being offensive and he will listen too. In other words, he has conversation skills. 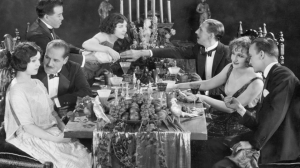 Unfortunately CJ was clearly still at the keyboard but I’d taken my book as a fallback position and so sat quietly with my pint in my Cotswold country pub, minding my own business. Sitting nearby was a trio of septuagenarians, perhaps octogenarians, who I’d seen before together, having lunch, as it seemed a regular thing to do.

As I read, my ears dipped in and out of their conversation. Topics ranged from the effort of getting out of bed ( and laughing at themselves) to Indian trade under the Raj (I live in the Cotswold ! ), and quick as a flash to Andean history, current book choices (he’s a slow reader apparently) …. back to their son’s new car purchase…  and so on.

To be honest, I wanted to play. I wanted to be part of this small group whose life experiences and breadth of interest would have held me for hours. Oh, the questions I could have asked.

This contrasted markedly with yesterdays exposure to modern night life.

Succumbing to the rumbles of hunger we found ourselves in the local KFC after going to see  “Lincoln” ( awesome – see it !! ). It would be a quick supper when getting home late meant that we couldn’t be bothered to cook. As you would imagine, all pond life was there.

I particularly noticed a young lady with pink hair, which she had matched with lime green accessories, lime green and pink tattoos all the way down her arm, and pink and lime green “camouflage” tights.  (Maybe she wanted to blend in with a bucket of vomit or something. ) Anyway, it was a statement yeah ?

Her shrieks split my ear drums. Her ramblings of being hit by her boyfriend were offensive. Her bravado was………………… where’s that bucket ?

Anyway, I’m usually more tolerant, but hey-ho. I’m just struck by the contrast in the space of 24 hours. Think on.

The Art of Conversation,  it’s your responsibility !

17 thoughts on “The Art of Conversation, it’s your responsibility………”