I have just come to the end of a three week stint as a Temp in the Returns Dept. of a local book distributor, the Christmas and New Year period being a natural peak in their business. 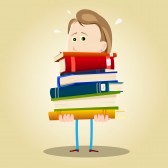 I love books, handling them – flicking through them  – stacking them neatly, so what could have been a pretty mind-numbing role for a while had it’s compensations, if only slight. Each returned book parcel could have held any jewel of enlightenment never previously encountered and so in a weird way it was fun. Firstly, subject matter was kaleidoscopic in it’s breadth. Everything from dictionaries to books on how to fold paper (!). Yes, I know, not origami, but just … folding paper.

Each parcel has a Returns Slip and most people would simply tick the nearest appropriate reason box for the return and leave it at that, though the person who returned the Pug Puppies Calendar was stuck without a box marked “ugly” .

The best returns notes, however, were those that gave you a little insight into the individual and their circumstance.  Such as the lady who was returning a book which she had bought for her daughter who was emigrating to New Zealand and now didn’t need the book because her husband had bought her a Kindle and she had now downloaded the book and could she therefore return it for a refund and she was really looking forward to starting a new life and wasn’t it wonderful etc etc……………..

Here are some of my favourite windows through the Return Slips…

So when you return your unwanted Amazonian purchase or such, write a little interesting something on the Returns Slip. It will brighten up a Book Unpackers dull day .

11 thoughts on “The Returns Slip… a window into your life ….”