For there to be a biography there has to be a story. It is no surprise then that there have been several biographies of Caravaggio, because the story is full of adventure and intrigue. It is a story of rogues, thieves, prostitutes, power and the underworld. 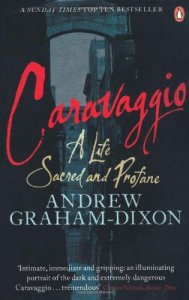 Andrew Graham-Dixon says in his excellent biography of the artist, “Caravaggio – A Life Sacred and Profane”,  that any biographer of Caravaggio must also be a detective. One supposes to get to the source, the issues, and track down the man hidden behind the tales, and certainly Mr. AGD has done that.  I cannot imagine a more expansive biography of Michelangelo Merisi (da Caravaggio).

inhabited  a world or artists and rivals, of brothels and drinking houses, of Church patronage and law courts, of violence and revenge. Oh, and by the way, he rebelled against the accepted traditions of Biblical art to carve his own inimitable niche in art history. His daily life was a chiaroscuro of dark and light, a fitting parallel to the masterpieces he created.

I’ve no intention of telling the story here. It is too long and my recommendation is that you read Andrew Graham-Dixon’s book. It is, in all honesty, a thriller. It took over 10 years to write, as a result of commitments elsewhere, but the time lag has allowed him to deliver a more complete picture – if you’ll pardon the pun. Historical archives have been trawled and research intensified. The result is a colourful, riveting and fast paced read through the shady world of the Roman underworld at the turn of the 16th century whilst Caravaggio, a master swordsman, swaggers his way through the drinking houses making friends and enemies in equal measure.

His commissions brought him fame and derision. He was loved – he was hated. He introduced simple directional lighting to his scenes. He worked with prostitutes and homosexuals as models (you can imagine how that went down !). He courted patronage and thumbed his nose. His talent, however, was undeniable.

Caravaggio’s belief in his art, in his insistence that people see these scenes differently from the classical style that had gone before, was to become his burden and his legacy. It brought him unshakeable troubles in his lifetime but an immortality of spirit.

Caravaggio was rock and roll.

14 thoughts on “Swords and skulduggery – Caravaggio as James Dean.”