I should be working but I just got to share this with you. Not strictly World Music but I just had to pass this on.

Who is writing the protest songs of today? One or two maybe, but it seems that the search for cheap celebrity drives everything forward for a certain generation.

Neil Young sat down for half an hour and wrote “Fork in the Road”. Sadly it sounds like half an hour is all it took.

Step up Ry Cooder with what is surely a superb album commentary on life today. There is no shredding or guitar histrionics on a Ry Cooder album. No flash bang “look at me” stuff – just superb music for the creation of music’s sake.

Cooder has been benefiting from a creative purple patch in recent years. His American trilogy – “Chavez Ravine” (2005) , “My Name is Buddy” (2007) and “I, Flathead” (2008) are all exquisite renditions of a moment in time and an acknowledgement of an American heritage.

His latest album “Pull Up Some Dust and Sit Down” is again outstanding.
Four albums in a row of sheer brilliance. I will review my trilogy favourite, “Chavez
Ravine” later, but for now  – Ry has had enough with politicians and bankers. 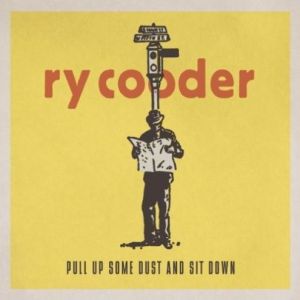 All the trademark Cooder sounds are here. Accordions, bar room
dance tunes, Spanish phrases, brass and strings all embellish Cooder’s enigmatic
delivery. Always striving to deliver songs in character Ry Cooder’s work is
never dull and hardly predictable. All the songs tell stories from the modern
depression and consciously parallel the Great Depression of the 20’s and 30’s.

Jesse James looks down from heaven on bankers stealing money and asks for permission to go down and sort it out with his .44 – a straight ahead waltz with a brass section rough and street wise.

The stakes are raised with “Quicksand” and stranded immigrants.

A rich and soulless “star” (?) reflects on the admonishments of his maid in “Dirty Chateau”  to a slow cool groove.

“Christmas time this year” romps along. A piece that for some will be hard to listen to. Cooder’s lyrics cover off some horrendous war injuries  whilst romping them along to a polka. I don’t know whether or not the hook line is meant to be a parody of “Do they
know it’s Christmas” – sure as hell works as satire, though.

“Baby joined the Army” is the perfect counter. A raw blues with sparse arrangement. Just Cooder and guitar. Arresting.

“Lord tell me why” picks up the pace. A foot tapper with a Gospel groove.

“I want my Crown” gets down and dirty. Fuzz guitar opener and a voodoo drive rock tune that tears with an evil vocal that brings to mind Captain Beefheart in his growling prime. Cooder invokes the Devil.

“John Lee Hooker for President” is a straight parody of a Hooker tune . Riff, beat, and delivery are all John Lee Hooker as John Lee sticks it’s message to a Government too busy to have the Blues.

“Simple Tools” tells the tale of a broken heart, broken family, when a working man loses his wife to a white-collar worker. Great shuffle feel.

“If there’s a God” speaks for itself but the album closes with the reflective “No Hard Feelings” . A superb summary of all that’s gone before and points the way with a philosophical line.

Cooder’s canon reflects his documenting of the modern American way and often the way of the World at large. Folksters fondly reflect with a tilt of the head and dewy eyes at the wisdom and legacy of Pete Seeger and Woody Guthrie et al.  In a hundred years time future generations of folksters will do the same over Ry Cooder. What a legacy to leave.