Last night was Book Club night. The irregular get-together with me and my Literary Harem. We had been reading “One Day” by David Nicholls and as usual the discussions opened up all sorts of areas that if you read the book without the follow-up interaction you probably wouldn’t pick up on.

This is not a review of the book. Just a few thoughts on it and modern books in general. This is a love story hinging around what happened on the same specific date in the year as the years roll by. A fair enough hook, I suppose. But, within a few pages, for me, Mr. Nicholls commits the first sin of the modern pulp fiction writer. He has clearly written the novel with both eyes firmly on the prize – the film rights !!  And there is nothing more irritating in a modern novel than getting the feeling that this is gonna turn up in a couple of years time on Christmas Day as “your general mainstream movie” for all the family, or not, as the case may be. My internal reaction is to immediately assume that any in depth examination of motive/plot/characterisation/pace is going to be subsumed into a general skip through the tulips to the bittersweet ending. And then I found out from the group last night that he had already had had such success with “Starter for 10” in 2006. 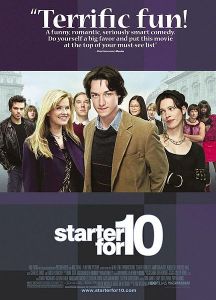 Just goes to prove, Mr. Nicholls, I can spot’em a mile off. My instinct is honed and true……and sure enough, here it is coming down the tracks.

The second sin, and he is not the only one who does this, is to name-drop classical music/art/films/records/ and so on, as if to impress you, the reader, of the authors erudition and breadth of his study and knowledge. This is showing-off at the expense of novel construction. I blame Nick Hornby – he started it. Haruki Murakami does it mercilessly – some of his titles warn you enough – “Dance,Dance,Dance” / “Norwegian Wood” /  “South of the Border/West of the Sun” / “What I talk about when I talk about running” ( a lift from Carver)…..and so on.

So, all in all, Mr.Nicholls can probably do better. But he’s clearly got his eyes on the prize and I’m sure he’ll be successful. What do I know?

Next book to read for the end of June is “The Woodlanders” by Thomas Hardy. From the ridiculous to the sublime.

4 thoughts on “Your Christmas Day film, you read it here first……….”