Over the weekend we had more news from our friends in India. A little background will put this in to context. Saravan and Nirmula live with their two children in a rural village called B. Kothakotha in Andhra Pradesh. It’s a large village, you’d hardly call it a town but it is becoming the economic centre for the surrounding villages.

The life and the land are hard. Saravan is an engineer who, having left university decided to forsake the riches and comforts of an engineer in the city to help the less fortunate of his fellow peoples in the rural areas of the country. He married and settled with Nirmula here, in B.Kothakotha, and founded the Chaitanya (meaning enlightenment) Organisation.

Project No.1 was the Watershed project to help the local communities develop an economy and grow food at the same time. Saravan uses the topography of the land to site and build (with volunteers from the villages – bare hands and spades only) huge dams 100 metres or more long and 20 metres high to harness and retain as much of the monsoon rains as possible. The resulting reservoirs, for as long as they can keep them, are then channelled through irrigation ditches to bring life to the barren land with the aim of growing crops such as ground nuts or custard apples for sale and consumption. So far, about 3000 hectares have been converted to productive arable land by sheer sweat and hard work. There are about 20,000 hectares to go.

I love India and see it as a multi-faceted country. I liken it to looking into a child’s kaleidoscope – so many colours, so much variation. I’ve heard it said by Indians themselves that you will find the best in people and the worst in people in one land. They can be incredibly generous to visitors and at the same time incredibly cruel to their own. Widows, the elderly and orphan children can be amongst the most neglected in society. The other long-term aim of the Chaitanya Organisation is to bring these sections of the local community together to help and support each other.

So what would a philanthropic Indian engineer want for his 40th birthday? Of course, an old people’s home….and so it was.

The Home at the nearby village of Beerangi has been opened with it’s first few occupants. 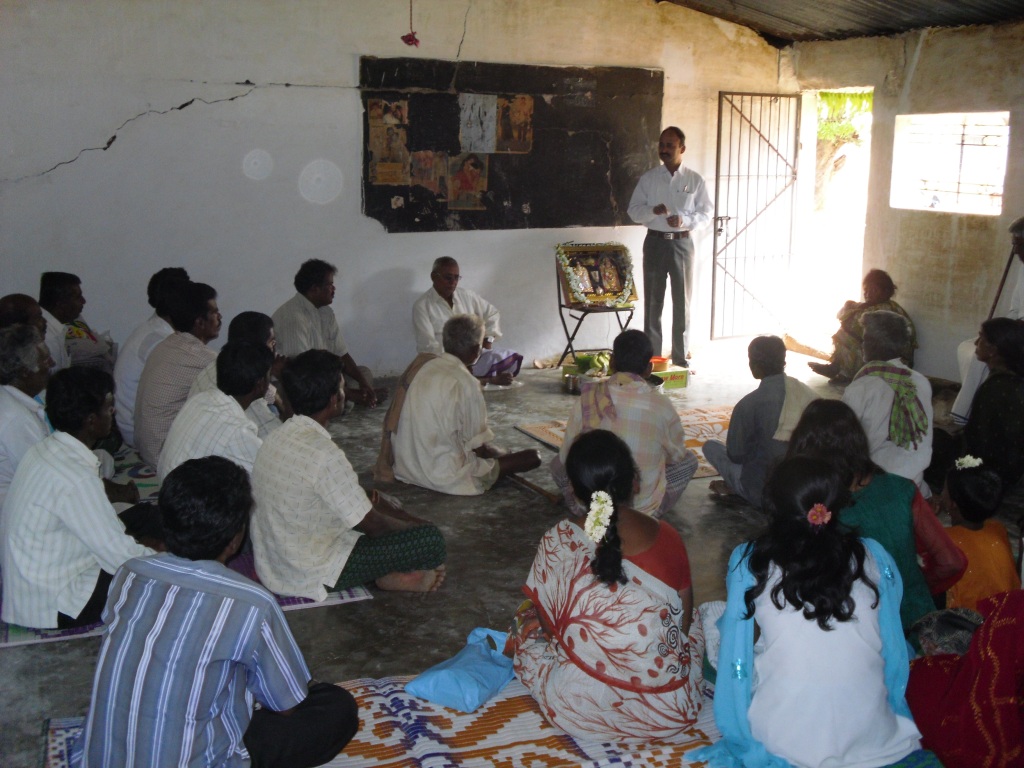 Saravan is the smart chap by the door (the Iron Man on my “Photography” page is kept busy).

This looks sparse but without doubt, a roof, somewhere to sleep and regular food is far more than to what these men have become accustomed. There are homeless people across the world.

Saravan and Nirmula’s philosophy is to help people take the first step to looking after themselves and having the means to sustain a new life from their own efforts – not from those of the Chaitanya Organisation. Hence, the people living here will contribute to the running of the home through their own efforts. Eventually they will care for orphan children too and in return the children will support the elderly and infirm.

A recent initiaive to help abandoned widows saw calves bought and paired up with a number of women whose only income was working in the baking sun of the fields. The calf grows to deliver milk which the women can then sell. Widows who demonstrate that they are committed to this are loaned another calf which they then buy through a loan scheme. (This is not the capitalist scheme it seems when written down. It ensures that help goes to those committed to helping themselves and ensures that the meagre resources of the Chaitanya Organisation are not too depleted.)

This couple live humbly devoting their lives to the community in which they live. Their news is always an inspiration to us. We live in a different world, of course, and our struggles and stresses can be just as demanding in their own way. But when it gets really tough we think of these abandoned people –  whose main concern of the day….is making it to the next one.